I had heard a few times that the western Lough’s can fish well at the end of the season to daphnia feeding fish in the deeps. There can also be a chance of dry fly fishing with sedges and daddies.

With this in mind I contacted my pal and Corrib boatman Tom Doc Sullivan to see if a trip would be worthwhile. Tom really knows his stuff and he told me to make the journey. However I wouldn’t be fishing any of the drifts I had fished on previous trips. It seemed like – go deep or go home!

I was joined by my mate Dave who has also fished the lake before but never at this time of year. Preparation had gone well and I was armed with a Mackenzie FX1 10ft #6 and #7wt. Tom had recommended tying up some bright daphnia patterns to pull on an Airflo Fast Intermediate line. As usual he was spot on. 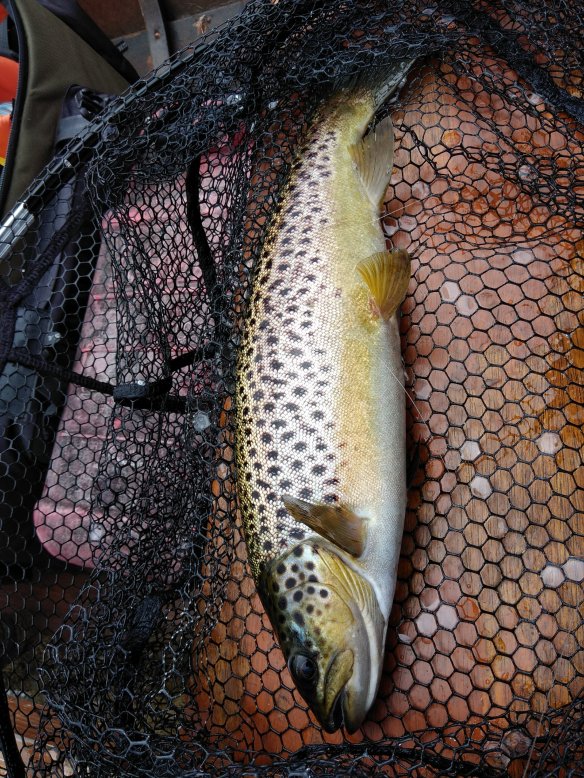 We didn’t know what to expect but followed Tom’s advice and with good conditions we had great sport catching beautiful wild Irish trout in a fantastic location. 24 trout landed in 2.5days fishing is awesome.

We learned a lot about fishing the lake at this time of year and it was brilliant to have several nice trout take our dry flies. 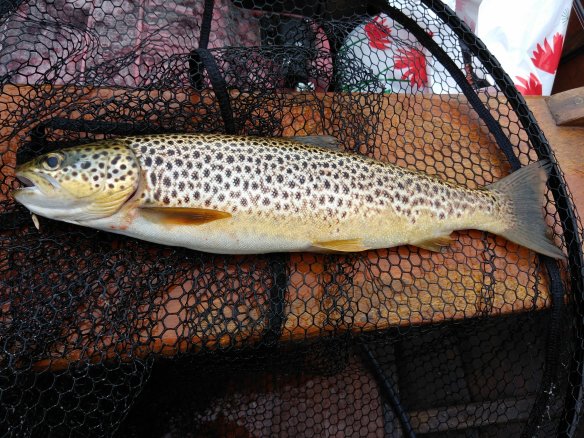 There is still a month left and the great thing was there wasn’t as many boats out compared to mayfly time. The weather was much milder than some of our early season duckfly and olive fishing trips too.

We will definitely be contacting Tom around this time next year and if prospects are good we will be back.

Recent guided sessions produced some nice spring salmon from the Munster Blackwater river. This season the water levels have been quite high on our local rivers and fly fishing opportunities have been fairly limited. Luckily the weather has been improving and the rivers reached a better if not ideal fly fishing height, particularly in the upper stretches. As a consequence we managed a few very nice salmon. 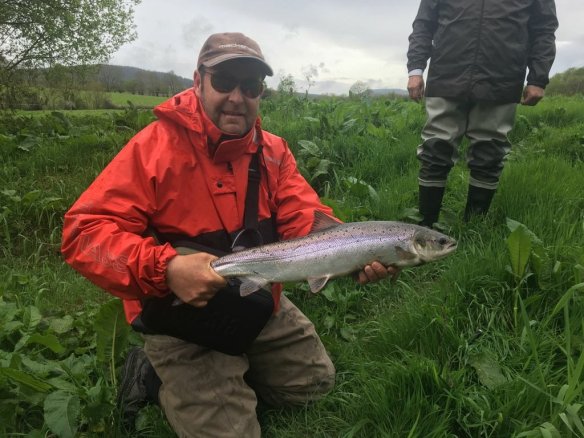 My guests were using two outfits, one was a 13’7 Mackenzie Atlas rod matched with a Mackenzie Phased Density Shooting Head in Float/Sink 2 and a short leader to a White Francis fly. 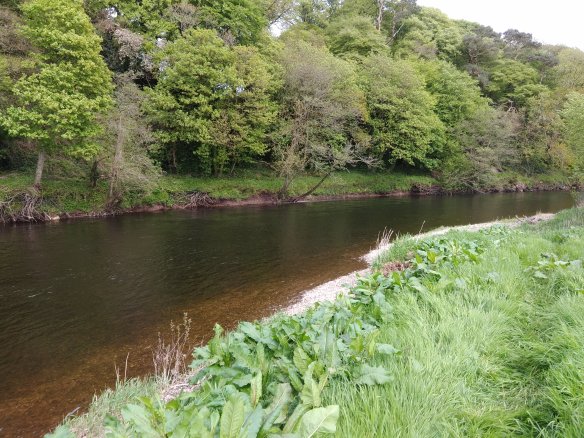 The other client used a 15ft Mackenzie FX1 GRAPHENE Rod matched with a Mackenzie Float/S1 shooting head and attached to the business end was a local shrimp fly pattern called Hick’s Bug. The guys were blown away by this kit and when good fish came the were even more impressed. 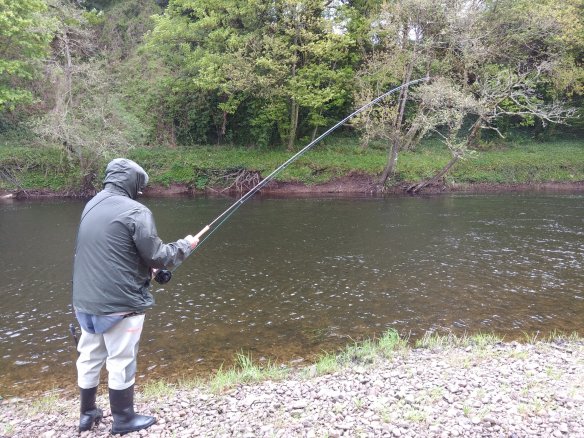 So some very happy anglers and a nice tackle test was a great result. The river is coming into good order again after the latest flood so fingers crossed for some more action. Tight lines!

This year a pal and I delayed our visit to Lough Corrib until late April due to the abnormally cold spring. It proved to be a good move as the weather was horrible all March. We knew we had missed the duckfly hatch but were hoping for Olives and large buzzer. Once again we stayed at Grasshopper cottage Cornamona near Clonbur.

We hired a boat and engine from our good pal and top guide Tom Doc Sullivan. Unfortunately we were too early for Olives this time. Our approach was to fish the conditions as there was no significant hatch. On the morning s the Lough was calm and the sun was high although it was cool enough with a Northeast wind.

In these conditions we fished buzzers. I was really impressed with my Mackenzie FX1 10ft 6wt for this method. Luckily we managed to boat some nice trout with the largest 58cm and in prime condition. 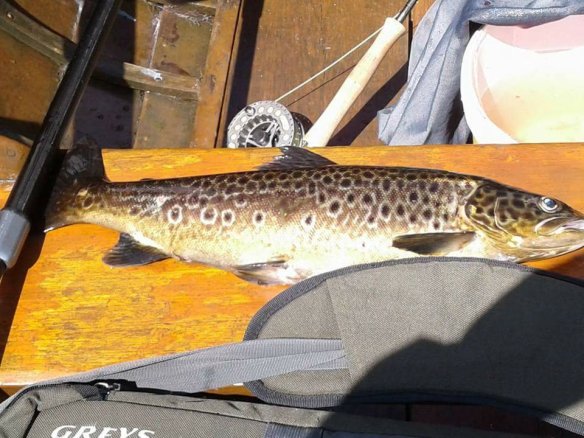 In the mid afternoon the wind picked up and we tried pulling traditional wet flies and dabblers on intermediate lines. This was productive especially around shallow areas. We had a mixture of small trout with some better fish to just over 2lbs and quite a few missed takes also. 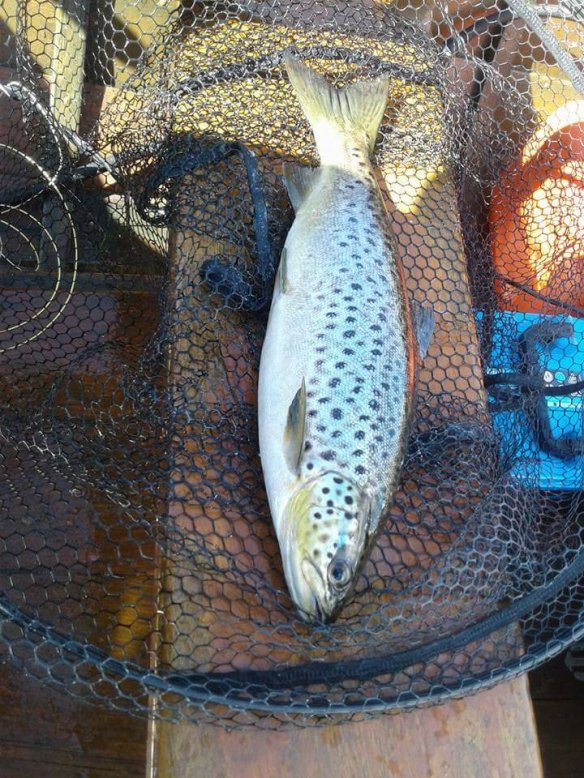 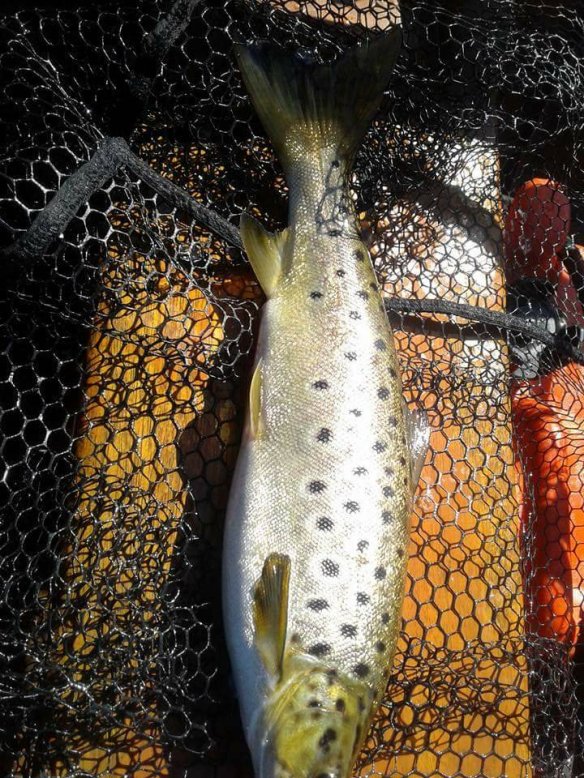 Overall we had a great weekend and are really looking forward to next year already.

Earlier in the week Kuba contacted me asking if I would like to end the season with a days fishing on Ardaire Springs.  Fishing on New Years Eve – of course!  It was the final chance of 2013 to ‘fling a fly’ into the water.  We arrived at the fishery at 9am and Krysztof, a friend of Kuba’s was there waiting.  I opted to set both my 10 ft Hardy rods – one with a floater and one with a sinking line. 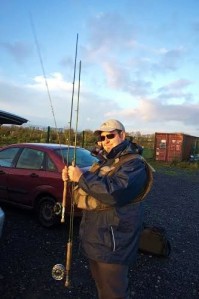 I put a spare spool for my Greys reel holding a 0.5ips Intermediate line into my pocket – just in case.  The lake was flat calm with not much surface activity.  The first hour or two were action packed for me with a lot of fish on a static bloodworm. 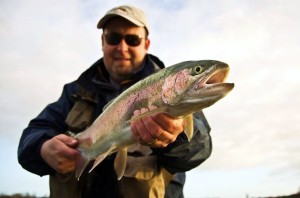 The wind picked up and there were periods of torrential rain.  I continued to pick up a few fish as did Martin who I have met at Ardaire on a few occasions now.  Kuba and Krysztof had a few takes on lures but not lots of fish. 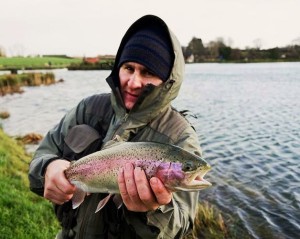 We took a break for lunch and I met some of the anglers that will be participating in my Stillwater course at Ardaire in February.  Really nice people. This course is now full but there are still a few spaces on the March course.  Later in the afternoon the strong wind and heavy rain moved off but air temperatures dropped.  The odd fish was still falling to nymphs fished really slowly.

I decided to try a black lure on the 7wt and it paid off.  Kuba wasn’t having a lot of success so I gave him a large streamer fly to try.  It was a pattern that had caught a lot of trout for me and anglers I guided on the Rivers Nire and Suir.  Third cast and he caught – result!

Even as the light began to fade away and the year came to a close there were still a few fish biting.

Not as many large fish as some previous trips to this fishery but fantastic to be fishing on New Years Eve and really looking forward to 2014.  Have to mention that the fish were in superb condition too. 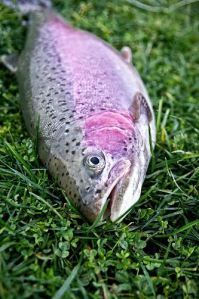