I spent last weekend in Galway at the Irish Fly Fair.  I didn’t think this Fair could have improved much on last year but I was wrong, Stevie Munn and his team have made it even better!  I’m already looking forward to next years Fair.  It was great to meet up with so many fishing friends.  There were awesome fly dressers including my good pals Denis O’Toole and Bobby Bryans.

I was really impressed by all the flies on display and the Irish salmon flies of Denny Brennan and Robert Gillespie were fantastic.  Dougie’s pike flies had some fellas drooling from across the aisle. Some of the imitative creations I saw on fly tiers row were so lifelike I’m surprised they didn’t fly away. 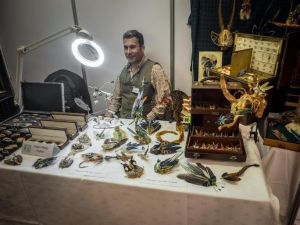 There were plenty retailers present selling all sorts of fly tying materials and items of fishing tackle.  It was great to see the “shiny things” that Rodgers Tackle, Funky Fly tying, AM Angling, Foxy Tails, Premier Angling, and others had on display.  I was out in the next room on the Ballyduff Bridge/Mackenzie DTX stand with Scott Mackenzie and Maurice Cahill and we were right beside our pals from Ardaire Springs, Waterford Fly Fishing and Fortwilliam.

It is a great tribute to the organising team to see so many fisheries stands at the show and all of the effort that also goes into promoting the sport of fly fishing and encouraging youth into fly fishing.

Each day Scott did a casting demonstration. 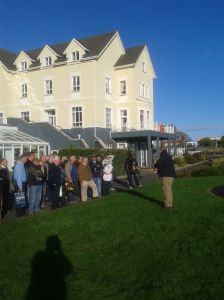 Ken Whelan and I did talks on seatrout fishing.  I was amazed by the attendance we had at the talks.  A massive thanks to everyone who came along both days.

I must also mention Brendan who helped out at the talks and was the first person over to me on Saturday asking if I knew of anyone selling tippet rings at the show.  It didn’t take long to solve that problem but we are ALL still trying to solve the puzzle of WHO ATE MAURICE’S ONION RINGS! Any information can be passed on by text, messenger or e-mail and we will forward it to the authorities ASAP!!

WELL DONE TO EVERYONE INVOLVED IN THE SHOW.