While the larger rivers have been quite flooded of late, the smaller local streams have remained fishable. These are beautiful discreet little tributaries close to the towns of Dungarvan and Clonmel. While the wild trout tend to be small in size they provide very enjoyable and often challenging fishing.

On these streams dry fly can be good on the slower water if trout are rising but typically one would fish with a dry dropper set up in the currents. In higher water a streamer can work really well.

Over the weekend I had a few short sessions with John, who is an experienced lure angler but relatively new to fly fishing. John wanted to learn new techniques and improve his casting ability. When the water drops space can be tight so a good roll cast and side cast is really useful.

demonstrating the “side arm cast”

On one Suir tributary we had several very large browns on the dry dropper in quick succession. These fish were in superb condition and one in particular was a real brute. 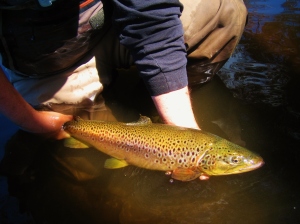 Unusually they did not seem very fussy and were willing to take either the dry with an untypical splashy rise, or the nymph. They were not as spooky as one would expect and we were able to sight fish them with beadhead pheasant tail nymphs with ease. Perhaps they were just ‘on the feed’ . . . . who knows for sure. In any event John had a great session and can’t wait to return for another go.