I was privileged to spend a day on Carrigavantry Reservoir with renowned fisheries scientist Dr Ken Whelan. This was Ken’s first visit to the Waterford Reservoir but I doubt it will be his last. It was a very enjoyable and rewarding experience to spend some time with Ken who has such an in depth knowledge of fisheries related matters. Ken had his aquatic insect collecting kit with him and we tried several areas of the lake to see what food sources were available for the trout. 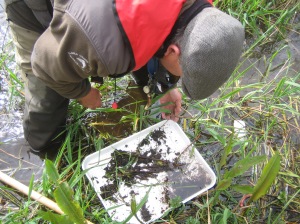 Ken was very impressed with the rich diet of food available for the trout at this lake and it was no surprise to him that the fish are always in such excellent condition. We found olive nymphs, bloodworms, buzzers, various caddis, damsel nymphs, dragonflies, beetles, shrimps, water boatment etc in the lake. 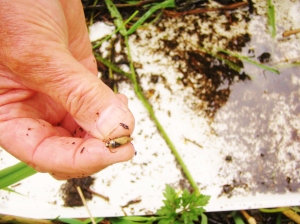 After the “science bit” I took Ken out fishing on the lake for a while. We caught a few overwintered rainbows that were feeding subsurface. 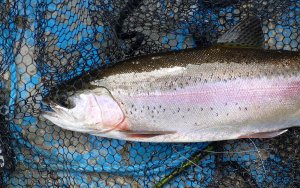 I suggested to Ken we change tactics and try for some of the larger brown trout present in the fishery. Conditions were good and I was confident as to where the fish might be. After a little searching Ken hooked into into something very large. After a superb fight I netted a MONSTER brown trout for him. He measured the length (64cm) and girth (40cm) of the fish which we estimated at 7.5lbs to 8lbs weight. He then released the magnificent fish for some lucky angler to catch another day.

The wind picked up and we tried one last drift before I had to leave and as it seemed to be our lucky day as Ken managed another fine brown trout of around 5.5lbs.

A fantastic end to a fantastic day. Once again the Waterford reservoirs lived up to their excellent reputation. Looking forward to some more fishing adventures with Ken later in the season.