I took Kuba, Dave and Frank over to Ardaire Springs yesterday. We were joined by Mick who is really getting into this Winter stillwater fishing. The guys started fishing and nothing was happening except for one Mick had on a bloodworm.  I decided to try my new articulated zonker in the hope of a decent fish, and it worked!

I showed the guys the fly I caught on. 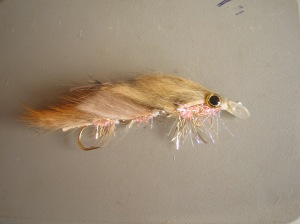 Mick said he didn’t have any of these articulated Rabbit flies with Vibrating lips but he would try a snake fly and I gave Kuba one of my chartreuse snakes to try.  Everyone started to smash fish!

Mick catches on his Rabbit Fly!

Someone made a comment that the Rabbit flies were rampant.  SO for the rest of the day snake flies and zonkers were known as Rampant Rabbit flies!!!!!!

A nice bow for Kuba on a Chartreuse Snake

After lunch the day changed and the fishing got really really tough.  Dave and Frank picked up a few fish on static bloodworms and Kuba caught a nice brown on one of my Dabblers.

A nice brown caught on a dabbler

I managed to winkle out a few more on a small Booby before we finished up. 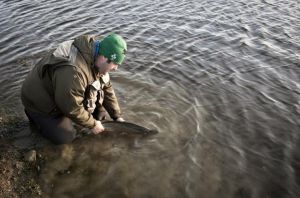 The guys commented on how they had really enjoyed the day and picked up a few new fishing techniques.  The banter was great and everyone caught fish!!