I attended the Irish Fly Fair in Galway over the weekend and have to say it was, in my opinion, the best year yet for this show.  In that regard, massive credit has to go to Stevie Munn and his team for their efforts.

I arrived up in Salthill late on Friday evening and the hotel was a hive of activity. Immediately from the moment of checking in I was meeting up with exhibitors and old friends from angling shows over the years. A special mention here for Justin at Wildebeest Clothing who had some polo shirts and caps ready for me with the gamefishingireland.ie logo embroidered on them. 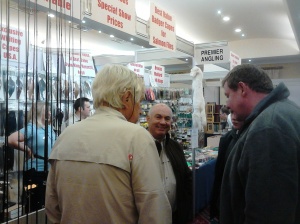 Pat and Sean on the impressive Premier Angling stand

So it was time for a bit of lunch and an early night as I wanted to have a look along fly tiers row before making my presentation on “Winter Tactics for Stillwater Trout” at 12am.  There were flies of all types being tied along the row by some of the worlds best fly dressers.  The first fly dresser I met was Chris Sandford who you might recognise from TV and vintage tackle shows.

There were some new tying materials on display and one that really caught my eye was some articulated shanks for tying baitfish imitations.  Dougie Loughridge was tying with these and had had some super pike and bass flies on display.

Dougie Loughridge with some cool flies on display

There were simply too many awesome tyers on display to mention them all.  So it was off to the seminar room to give my talk.  A great bunch of interested anglers came along and everything went well.  After lunch I browsed all the stands and made a few (too many) purchases.  I met and spoke with lots and lots of people about all things fishing and more.

There was an unbelievable range of tying materials on display. The Clonanav/Fortwilliam stand had lots of tackle and clothing from all the leading brands including the new Hardy Jets which are simply awesome.  In the next room there were more fly tyers and fishing organisations including our very own Waterford Fly Fishing and the Drowes stand where my good friend Denis was busy tying tube flies. 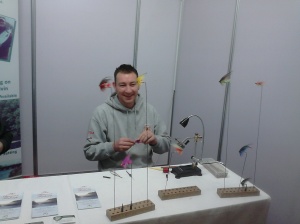 Denis O Toole with some of his templedog style salmon tubes

After purchasing bags of materials it was time for a bite to eat and watch Ireland beat Samoa in the Rugby followed by a few pints with some friends.  It was nice to have a little lie in on Sunday morning before heading back to the show to give another seminar.  On the way past I think I saw Shane Rodgers still counting the takings from Saturday!!!

Shane on the Rodgers Fishing Stand

Once again I had a good turnout for my talk and it was particularly nice of Dr. Ken Whelan to take the time to attend and also contribute a lot in terms of entomology.  A massive massive thanks to everyone who came along on both days and commented positively on the seminar and took business cards and made inquiries about my guiding and casting tuition service.

Getting prepared in the seminar room.

So that was my part finished for the fair and I had a spot of lunch and just had time to see the seminar on the Western Lakes by my good friend Tom “Doc” Sullivan before setting off for the 3.5hour journey home.  Overall I had a super time and can’t fault the show one bit.  Well done to Stevie and the team and I hope to be back next year.  The next show in Ireland will be the Ireland Angling Expo in Swords in February.  Hope to see you all there!