Luke collecting a prize for heaviest rainbow from Tom Connolly

Last Sunday the Waterford City and County Trout Anglers held their annual Dick Doyle fly fishing competition on Carrigavantry Reservoir.  Although I don’t normally participate in competitions I decided that as a Club committee member I would support the event and it would be a day out fishing with Luke anyway.  On Sunday morning all the competitors gathered at the boat dock and got ready for the competition start.  They were mostly adults but there were a few juveniles also taking part. When the time came we set off up the lake and did a few drifts.

Heading up for a drift.

I managed to hook two trout early on but failed to land either of them.  Luke had one hit but missed it.  By around 2pm two anglers had two rainbows and a few other anglers had 1 rainbow.  The pressure was on to catch something and having lost two fish I decided to change flies.  I tied on a team of Vampire Dabblers and had a nice 1.2kg bow and had a follow from a decent looking brown.  Then I saw Tom Connolly land a nice brown. 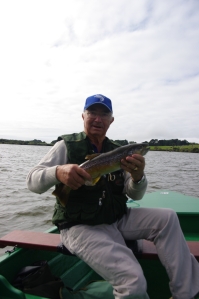 Tom Connolly wins heaviest brown with this fish that was the only brown landed int he competition,

Shortly after that Ray Brett had a nice bow on a dry fly and with only minutes remaining Club Secretary Dave Tantrum caught his second rainbow using what he described as “straight line nymphing tactics”.  This proved to be vital for Dave as he won the competition with the heaviest bag of fish.

The most important thing for me was that Luke enjoyed the day and of course he was a proud lad when he got home to tell his mum about the Greys GX500 reel that he collected at the end.  The Club is hosting an open competition in October on Knockaderry Reservoir and who knows I might even go along to that one too.